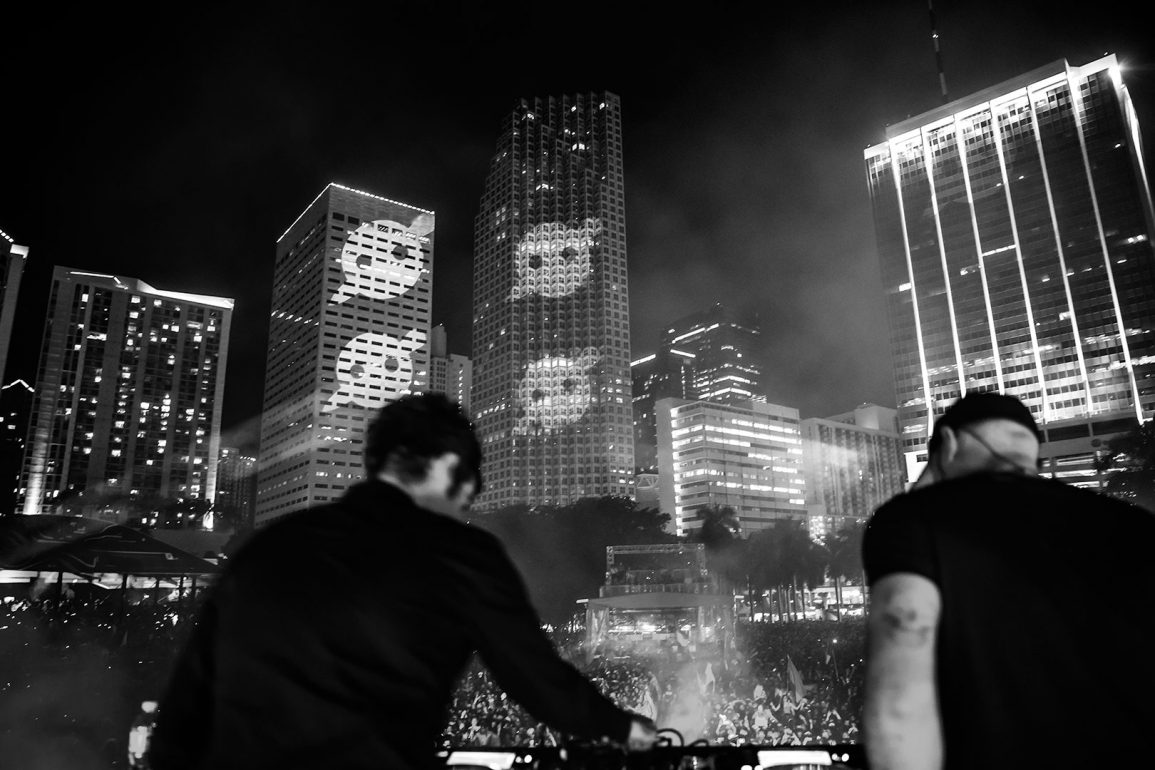 Electronic dance duo Knife Party exploded out of the blocks back in 2010. Formed as a new project to Rob Swire and Gareth McGrillen’s drum and bass powerhouse Pendulum, the duo launched with super viral hit ‘Internet Friends’ and the multi-platinum single ‘Antidote’ alongside Swedish House Mafia. Releasing 5 EP’s and a full length album ‘Abandon Ship’ which hit #2 on the US Dance chart, Knife Party’s extensive catalog has been streamed over 500 million times to date. Playing main stages at dance festivals all across the globe, Knife Party headlined the massive Ultra Music Festival in Miami in 2016, before returning in 2019 with their ‘Lost Souls EP’.

When the global phenomenon that is Pendulum pressed pause on the band back in 2012, no one knew that one of the most sought after production duos in electronic music would be created – Knife Party.

Formed of founding Pendulum members Rob Swire and Gareth McGrillen, Knife Party was created with the aim of showcasing ideas which wouldn’t fit into their existing mould, taking inspiration from a range of different genres across electro house, dubstep and everything in between.

“I just wanted to do something different, to start over, from scratch.” Explains Rob. “No expectations, no commitments, no billboards announcing new music.”

Exploding out of the blocks with their debut EP in 2011 ‘100% No Modern Talking’, the 4 track project racked up over half a million downloads and featured the viral single ‘Internet Friends’. Despite being available for free on the Knife Party website, the EP broke the iTunes Top 10 in both the UK and Australia and launched the duo back into the spotlight under the new alias.

For many, hitting pause on one of the biggest electronic acts in the world at the very peak of its success was an arguably questionable decision, but both Rob and Gareth were happy that Knife Party gave them the creative freedom to make music as they saw fit.

Their follow up EP ‘Rage Valley’ again hit the Top 10 on the iTunes charts in the USA, Canada, Australia and the UK, whilst 2013’s ‘Haunted House’ marked Knife Party’s first Top 40 entry on the Billboard 200 peaking at #37. Lending their hand to remixes for the likes of Labrinth, Porter Robinson and Nero followed, as well as a collaboration with Swedish House Mafia on the massive global chart hit ‘Antidote’.

Releasing their 2014 debut album ‘Abandon Ship’ early after an initial leak, the full length project saw a deviation in genre, moving from the heavier dubstep sound Knife Party had become known for on their earlier EP’s, and incorporating elements of more mainstream electro house. The album hit #2 in the Billboard Dance chart and received worldwide critical acclaim with Zane Lowe calling it “One of the records of the year”, and DJ Mag who said, “This release sets the duo on a path to greatness.”

After an intense 2015 touring schedule, with headline slots at Global Gathering, Tomorrowland, Future Music Festival and Ultra, as well as a host of other internationally renowned festivals throughout the summer Knife Party returned again, this time armed with a brand new live show setup for the year and another new EP ‘Trigger Warning’. They debuted new tracks such as ‘PLUR Police’ and ‘Parliament Funk’ to a rapturous crowd at a sell-out show at London’s Brixton Academy on Halloween of that year.

After an already successful run of headline dates, in 2016 Ultra Music Festival Miami made the announcement that Knife Party would be main stage headliners, alongside a reformed Pendulum for a joint top of the bill slot. Their biggest show to date saw them bring out Tom Morello of Rage Against The Machine/ Audioslave for a special performance of the hit ‘Bonfire’ as well as the global debut of their collaboration ‘Battle Sirens.’ Deadmau5 also took to the stage for a live version of ‘Ghosts N Stuff’ making the closing set even more historic as the first time this had been performed on a festival stage.

After reforming Pendulum for a further series of headline festival shows across 2017/2018 and releasing their ‘Reworks’ album, which featured a Knife Party remix of the band’s classic ‘Blood Sugar’, the duo are returning in 2019 for a brand new Knife Party EP ‘Lost Souls’, as well as their newly launched Knifecast.

Starting in December 2018, Rob & Gareth’s podcast series Knifecast gives fans a welcome, and rare insight into their world. Given that Knife Party have made a point of rarely doing any interviews since their inception, the podcast gives listeners a chance to hear the pair speak candidly about anything and everything, and they’ve been joined by guests including Jauz, Sub Focus, Kill The Noise, Tom Morello and others.

Debuting some of the new tracks on the Knifecast, the new 4 track EP combines Knife Party’s intense and uncompromising fusion style, and includes the dubstep title track ‘Lost Souls’ as well as house banger ‘No Saint’, a gruesome bout of techno on ‘Ghost Train’ and the EDM anthem featuring Harrison – ‘Death & Desire’ (Feat. Harrison). Released on their own label Earstorm, the EP marks a welcome return for the duo and their first release in 4 years.